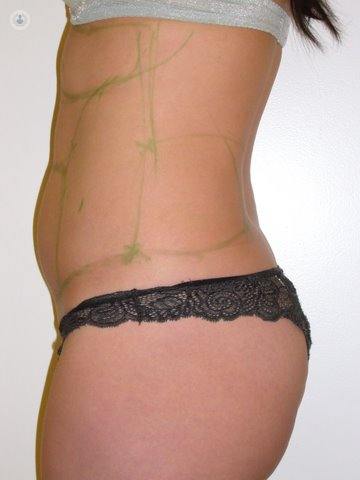 People may choose to undergo liposuction for a number of reasons all revolving around a general dissatisfaction about the shape of their body. Often, even after exercise and dieting, excess fat can remain in some places. Due to its immediate results, liposuction can greatly boost a person’s confidence. Liposuction may also be used on people who are not necessarily overweight but rather unhappy with their physical appearance. Other reasons to undergo liposuction include reducing fat production, improving one’s health, and stimulating collagen growth.

How is liposuction performed?

Liposuction involves sucking excess fat out through a tube. After marking the parts of the body to be treated, the surgeon then injects the area with medication and anaesthetic-containing solution that reduces blood loss as well as bruising and swelling. Fat cells are then broken up in order to make them easier to extract before a small incision is made and a suction tube is inserted. The tube is moved around the area in order to suck out the fat. After, excess fluid and blood is drained before the patient is stitched up and bandaged. The operation usually lasts around one to three hours, and is carried out using a general anaesthetic or epidural anaesthetic in lower areas of the body. The patient usually has to remain in hospital overnight.

How can you prepare for liposuction?

In order to prepare for liposuction surgery, the patient may be recommended not to take specific medications, such as blood thinners, for at least two weeks before the operation. Liposuction preparation depends on each individual, and a specialist will provide advice on what to do beforehand.

After liposuction, the patient may have to take antibiotics in order to reduce the chances of infection. Compression bandages or an elasticated support corset are fitted in order to reduce bruising and swelling. These are worn for several weeks post-operation. In some cases, such as when a large area of fat is removed, some time off work may be necessary. If the patient had a general anaesthetic, they won’t be able to drive for a few days. Full recovery after liposuction surgery generally takes two weeks.

This website uses cookies to improve your experience while you navigate through the website. Out of these cookies, the cookies that are categorized as necessary are stored on your browser as they are essential for the working of basic functionalities of the website. We also use third-party cookies that help us analyze and understand how you use this website. These cookies will be stored in your browser only with your consent. You also have the option to opt-out of these cookies. But opting out of some of these cookies may have an effect on your browsing experience.
Necessary Always Enabled
Necessary cookies are absolutely essential for the website to function properly. This category only includes cookies that ensures basic functionalities and security features of the website. These cookies do not store any personal information.
Non-necessary
Any cookies that may not be particularly necessary for the website to function and is used specifically to collect user personal data via analytics, ads, other embedded contents are termed as non-necessary cookies. It is mandatory to procure user consent prior to running these cookies on your website.
SAVE & ACCEPT